Squeezing more performance out of a large, concatenated fact table

Squeezing more performance out of a large, concatenated fact table

Preview of data model after joining Customer to Sales fact table on CustomerKey: 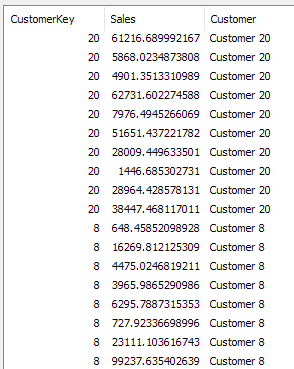 Recently I got around to doing some more testing involving both variables and codifying this in a subroutine so it would be easy to leverage more widely to improve application performance.

To the naked eye, the three tested scenarios have identical data models, anchored with a 39M-row concatenated fact table: the only difference is in how that fact table was sorted in the final application.

As you can see, in my test, applying logic to the fact table to group like Date values together improved performance by a full third, lowering calculation time from 5.9 to 3.9 seconds. Not bad for so little additional work and reload time.

As you can also see, I did not observe better performance from ordering the dates sequentially (scenario 3) compared to just grouping the like values together (scenario 2). Because that script's execution took significantly longer and used a lot more RAM (resident loading the entire concatenated fact table again, with an ORDER BY), I would stick with the lower overhead field grouping approach.

Here's the subroutine script I used for testing, ready to be re-used. You just have to plug in the table name and the field whose values you want to group.

Here is what you see when you call the sub:

That said, if you are already normalizing the data model to reduce hops between tables by combining tables, this subroutine would not even be needed. Based on what we have learned about joins, we need only to join the calendar table to the fact table last in the overall sequence of joins to group the like date values together in the final data model.

The leader in optimizing business through data