Recently a zoology study about dog defecation has gone viral. No, seriously.

In an attempt to test dogs' sensitivity to Earth's magnetic field, researchers recorded the urination and defecation of a sample of dogs and plotted the angular position of their bodies during these acts against the magnetic field. The results of the study produced great visualizations like these:

Each dot represents the mean angle of a dog across all of it's observations. I believe the dotted line through the middle represents either the mean of all observations and the arcs some sort of confidence interval or magnetic field spread, but I am not certain.

I reproduced the chart in QlikView using radar charts, with the dotted line as the mean and the highlighted arcs as a 95% confidence interval. Random data was used to produce the following: 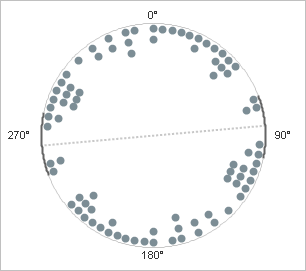 The creation of this chart required several elements:

Instead of posting a link to the QVW here, I've decided to give Stefan Walther's idea a try and post the document to GitHub. The script is kept externally from the QVW so that changes can be tracked separately from the front end.